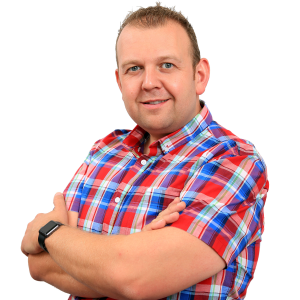 Nickname: I don’t really have one now, although at school it was naturally ‘Fletch’

Hobbies: I love getting out and about on my motorbike! I wanted to learn since I came to the Island back in 2008 and finally pulled my finger out and took lessons in 2018 . . . I've never looked back! Lockdown introduced me to gardening, I went nuts and extended my existing patio at home - it's amazing what you can learn to do via YouTube! I'm also really in to weddings, I'm at one most weekends . . . as host and DJ!

Most Annoying Habit: I do this ‘thing’ with my fingers when I’m bored or nervous, it usually culminates in me cracking my knuckles loudly!

Most Likely To Say: Be Good

Favourite TV Show: A bit late to the party, but I've not long discovered Netflix and Prime . . . there's so many great shows on there that I couldn't possibly choose. I'll narrow it down a little and say anything that features a serial killer, I have a strange obsession with shows about them, I also love Line Of Duty!

Favourite Food: Indian . . . or maybe Chinese, then again, it could be Pizza, or maybe donuts! Who put this question on here?!

Embarrassing Moment: It would have to be a wedding I was working at a good few years back in Manchester. I invited the Bride and Groom on to the dance floor for their first dance then hit play on their special track, a few seconds in you could tell something wasn’t right, the Bride’s face was like thunder and tears soon appeared. Thinking it was just an emotional moment it wasn’t until the Groom asked me to stop the track, stating he had in fact instructed me to play the wrong one, when all became apparent! The first dance I had been asked to play was Elton John’s ‘Circle Of Life’, the Bride had in fact wanted Elton John’s ‘Can You Feel The Love Tonight’, a few moments later following a quick rummage through the CD folder and the correct track was on. Not my mistake but highly embarrassing none the less, thankfully the Bride later saw the amusing side and we can only assume the wedding night went ahead without a hitch!

Most Memorable Moment: Workwise - hosting TT Mayhem on Douglas Promenade a few years back in front of an estimated 7000 people was pretty awesome, as was fronting the 2017, 2018 and 2019 Douglas Christmas light switch on.

Who's Your Hero: This role is still to be filled, so for now let’s say Adam Richman from Man Vs Food

How Would You Like To Be Remembered: As a really nice, friendly, genuine guy . . . there’s not many of us about I’m told!

Best Chat-up Line: Seriously??? I’ve never used one in my life! I don’t do chatting up, I’m usually oblivious to any female affections thrown my way, as my 3FM colleagues have told me on several occasions!

What Animal Do You Most Resemble: I’ll say a big cuddly bear!

Give 5 Words That Most Describes You: Funny, Smiley, Positive, Genuine, Foodie!

Worst place been caught short: Honestly, I don’t think this has ever happened to me – you’re never that far away from a toilet!

If I was invisible for a day, I would: Skip to the front of the queue’s and ride all the rides at Magic Kingdom, Epcot, Hollywood Studios, Animal Kingdom, Universal Studios and Islands of Adventure in Florida! I was going to say sneak in to Holly Willoughby’s dressing room, but that would be wrong. Very wrong!

I never want to meet: Davina McCall . . there’s something about her drives me nuts!