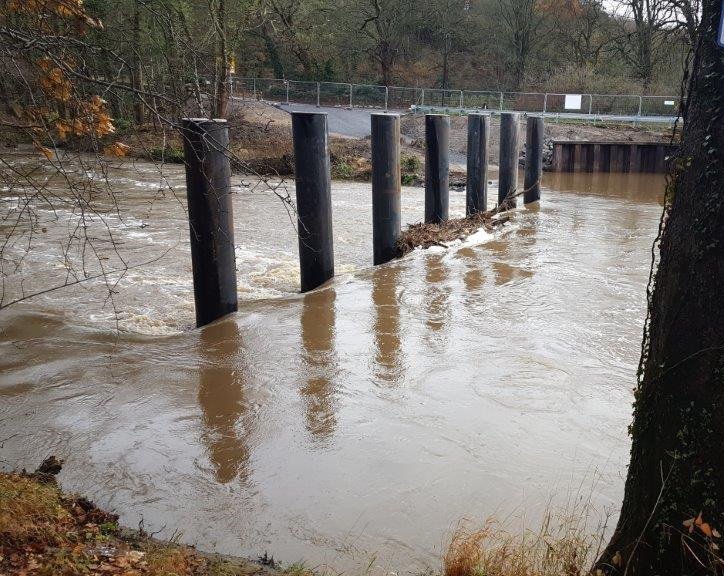 Work to reduce the flood risk on the river in Laxey will get underway next week.

Both Manx Utilities and the Department of Infrastructure are involved in the building of a debris catcher across a section of the river at Glen Roy.

The scheme, which will use three-metre-high timber posts, is designed to prevent trees and branches forming blockages downstream.

Nine will be set into two staggered rows collecting debris up-river, away from properties.

DoI and MU will be responsible for the maintenance of the debris catcher which will be located west of the wooden bridge in the Glen Gardens.

Last year, a major incident was declared after devastating floods struck the village of Laxey.

It resulted in the evacuation of a number of residents from their homes along Glen Road.

An independent report into the event was undertaken by ARUP, a engineering consultancy firm, which found the considerable build up of trees at the MER weir to be ‘potentially the most significiant factor’ in the October floods.

‘As a heavily wooded catchment, river maintenance and management in the Laxey and Glen Roy valleys is vital’ according to the report, ‘because of the risk of felled trees can wash downriver and snag leading to much increased risk of flooding to property and infrastructure.’

It also said accounts from Laxey residents suggest that ‘a lack of adequate maintenance has been an issue for many years.’

ARUP says the debris catcher scheme will mitigate this risk and forms part of a raft of flood alleviation proposals for Laxey drawn up by Manx Utilities.

Work will begin on July 8, though Garff Commissioners says the public footpaths in the area will remain open.

Last month, MU announced it was looking to extend ‘some powers’ to the local authority, so ‘prompt action’ can be taken should ‘any material issues arise.’