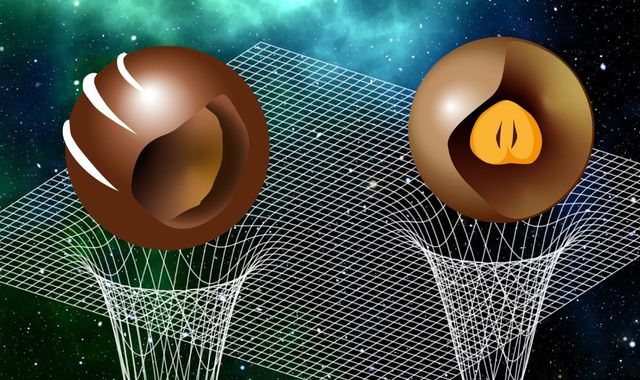 It turns out the Milky Way is not the only cosmic entity with chocolatey connotations.

More than 60 years after they were first discovered, scientists working to understand the structure of neutron stars finally have the perfect point of comparison: chocolate pralines.

Neutron stars, which are formed when a supermassive star collapses, are incredibly compact and dense - physicists describe them as akin to the mass of the sun being compressed into a sphere the size of a large city.

Such extreme conditions cannot be replicated in a laboratory, so researchers have had their work cut out to better understand exactly what makes up a neutron star.

Using hundreds of thousands of so-called equations of state, which aim to describe the stars' properties, a team at Goethe University Frankfurt made a discovery which gave them their tasty new point of reference.

The key equation behind the finding was the speed of sound, which measures how fast sound waves bounce around within an object.

This will depend on how stiff or soft matter is, and on Earth is used to explore the inside of the planet and discover oil deposits.

For more on science and technology, explore the future with Sky News at Big Ideas Live 2022.
Find out more and book tickets here

Professor Luciano Rezzolla, who led the university group, said: "This result is very interesting because it gives us a direct measure of how compressible the centre of neutron stars can be.

"Neutron stars apparently behave a bit like chocolate pralines: light stars resemble those chocolates that have a hazelnut in their centre surrounded by soft chocolate, whereas heavy stars can be considered more like those chocolates where a hard layer contains a soft filling."

Despite the sweet satisfaction of their latest findings, the physicists say neutron stars still harbour many mysteries, including when it comes to their exact structure and composition.