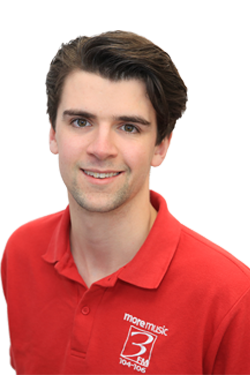 Hobbies: I play in a band called Sunset Jet

Previous Horrible Jobs: I used to climb into factory machines to clean them out

Most Annoying Habit: I approach every situation with an irritating blend of sarcasm and cynicism

Most Likely To Say: Pints?

Least Likely To Say: Qween, Yas or any derivative thereof

Embarrassing Moment: I ate Salmon Roe to impress a cultured London friend of mine and dry wretched in her kitchen for a good 20 minutes… she gave me some microwave chips to get the taste out and I knew the life of the landed gentry was out of grasp.

Most Memorable Moment: Winning the Isle of Man’s under 15s Table Tennis B League

Who’s Your Hero: I normally dress as Superman

How Would You Like To Be Remembered: A misunderstood icon

Best Chat-up Line: The only one that’s ever worked is asking a girl whether the guy stood next to her was her boyfriend, turned out it was her ex, we’re still together now. I’m kind of an every day Montague.

What Animal Do You Most Resemble: Jack Russell

Give 5 Words That Most Describes You: Extremely-Hardworking, Creative, Probationally Contracted

Worst place been caught short: During an interview

Celebrity you most look like: Pete Shelley, whoever he is, that’s what the older DJs told me.

If I was invisible for a day, I would: probably have my pay docked